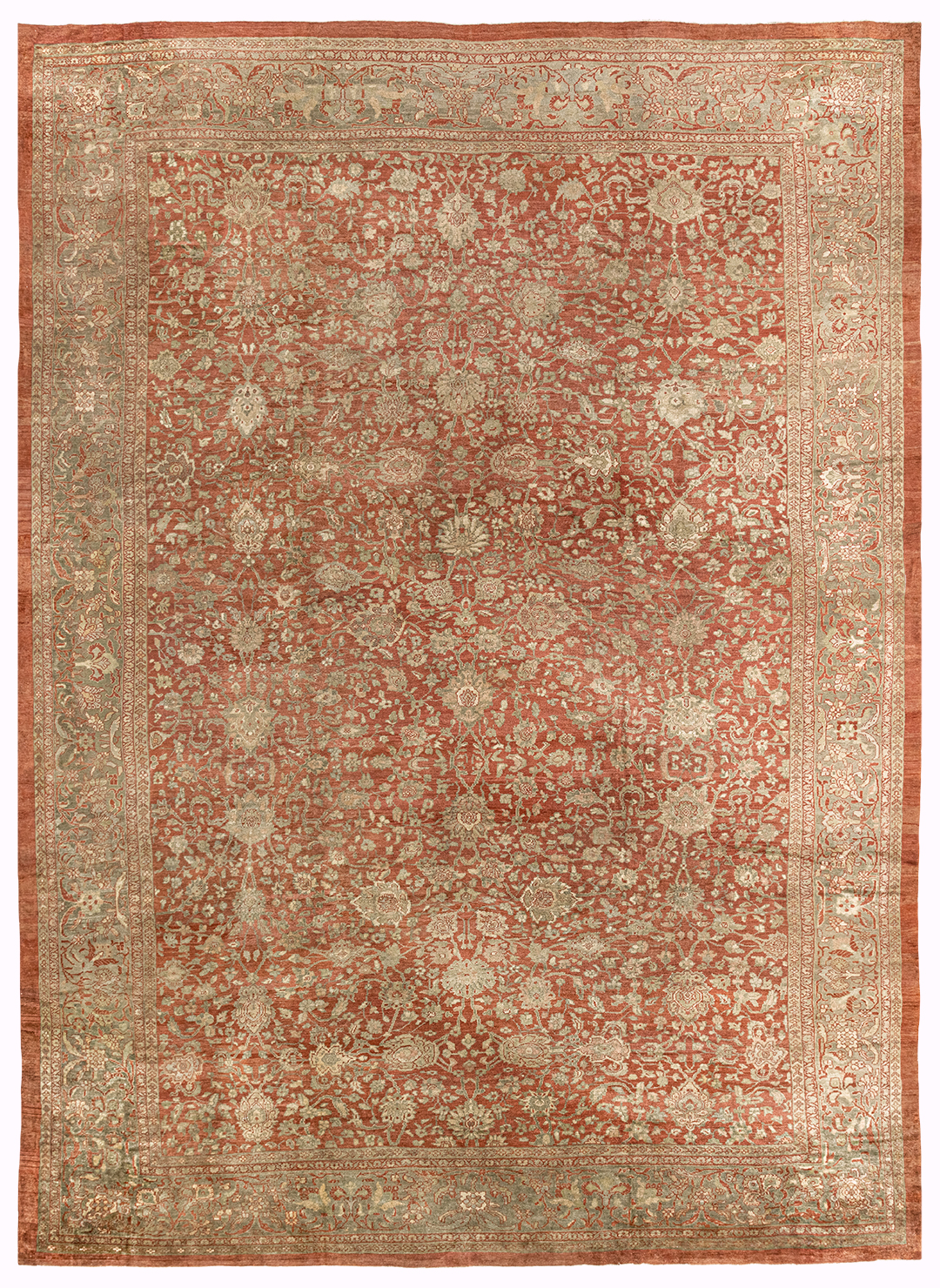 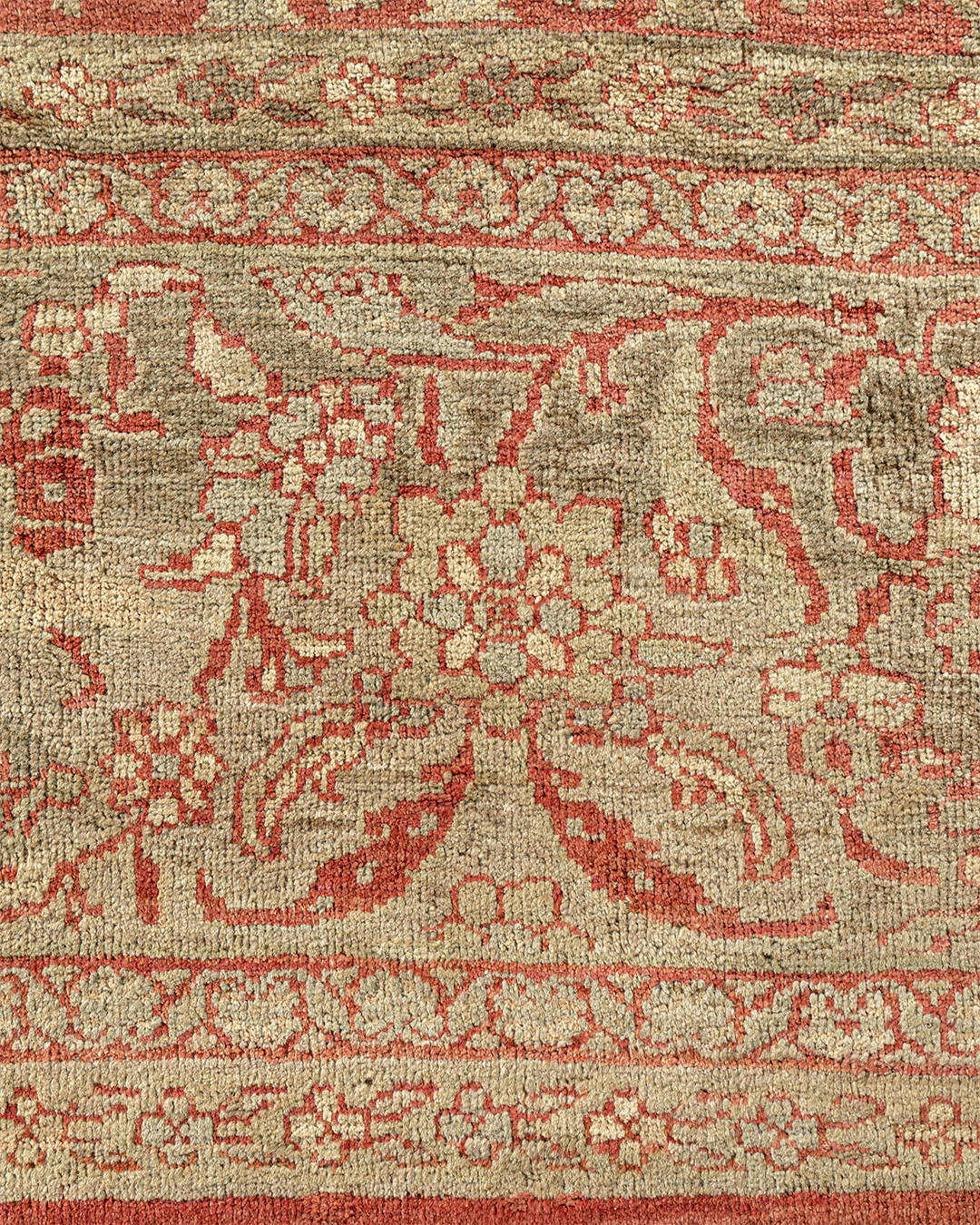 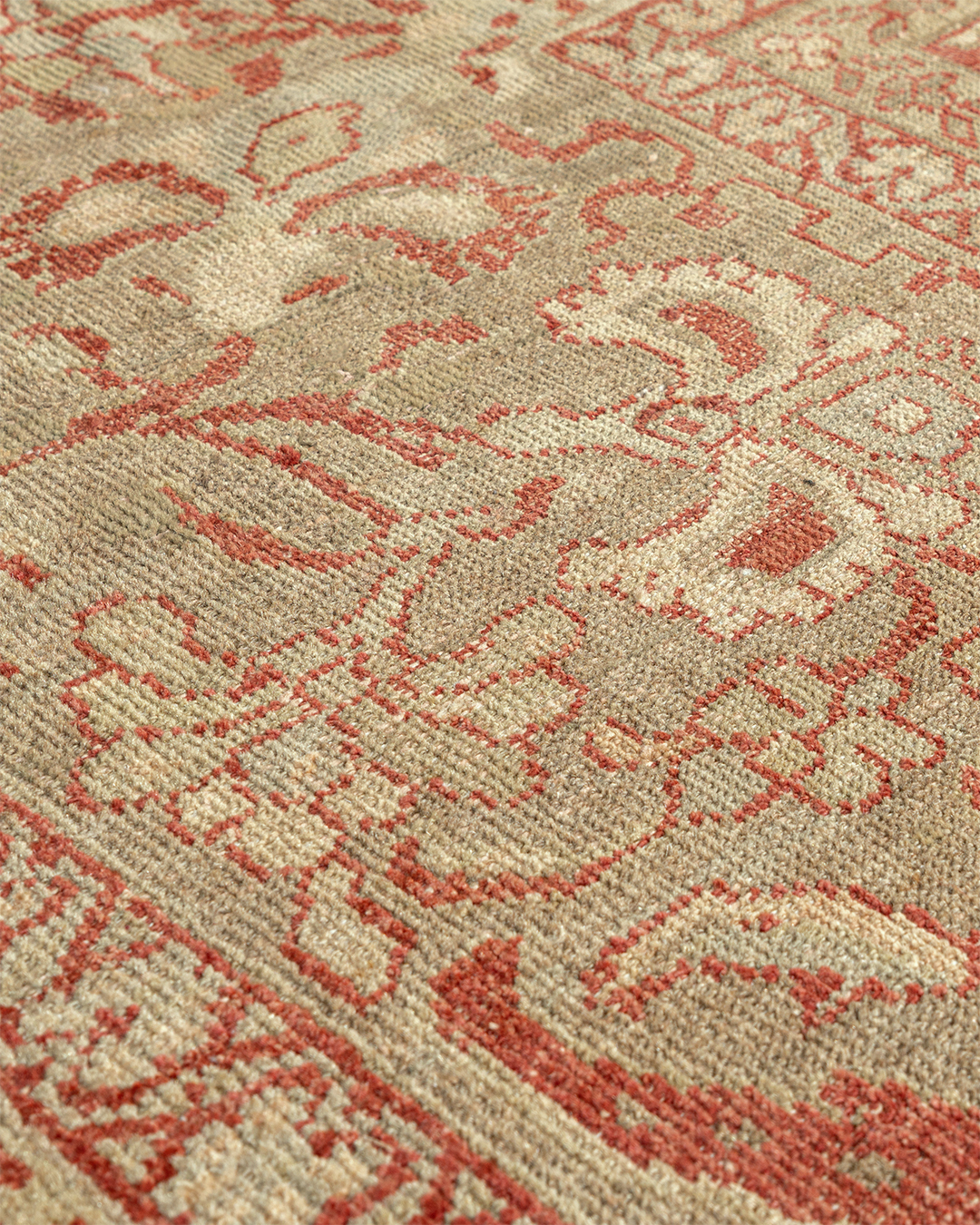 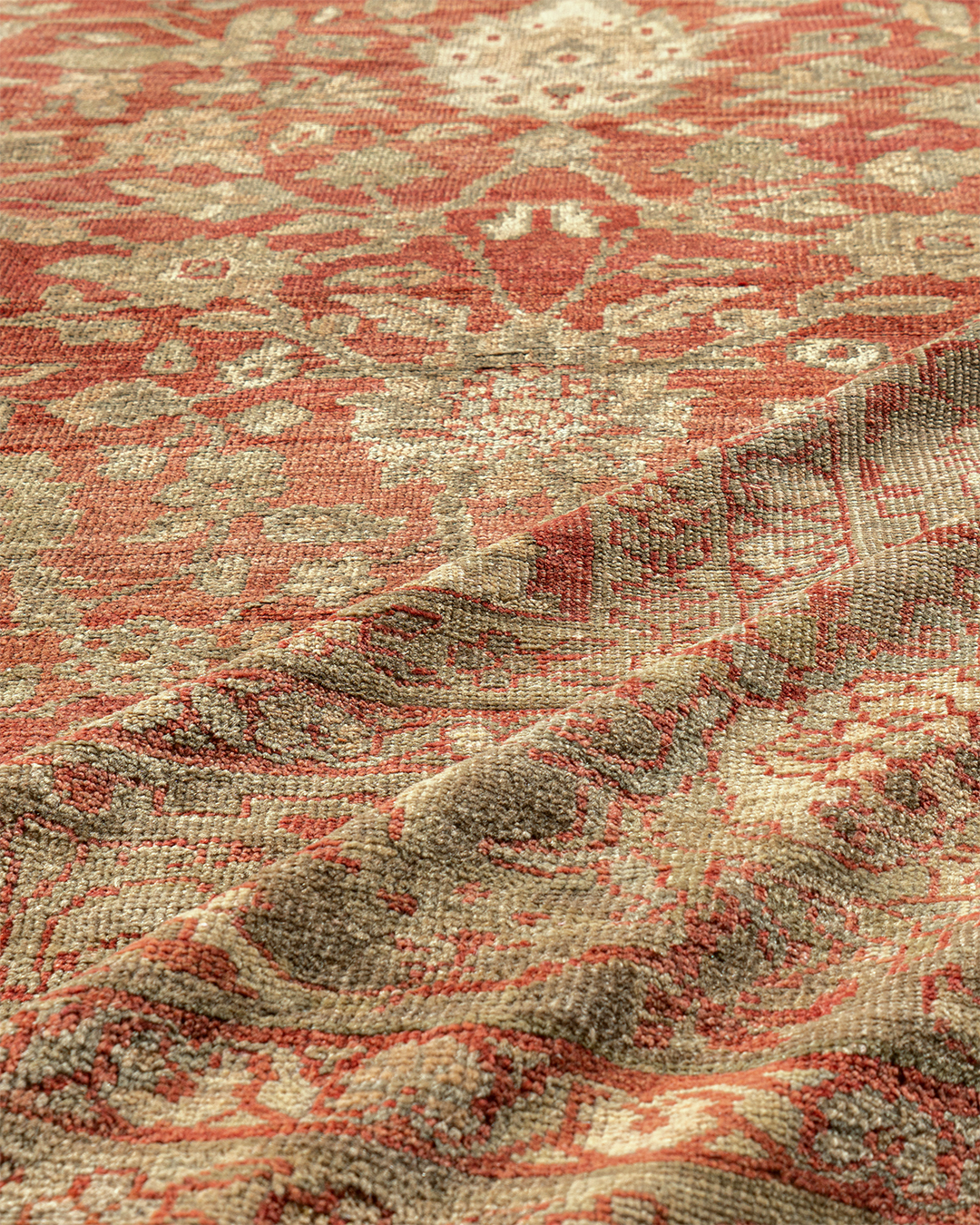 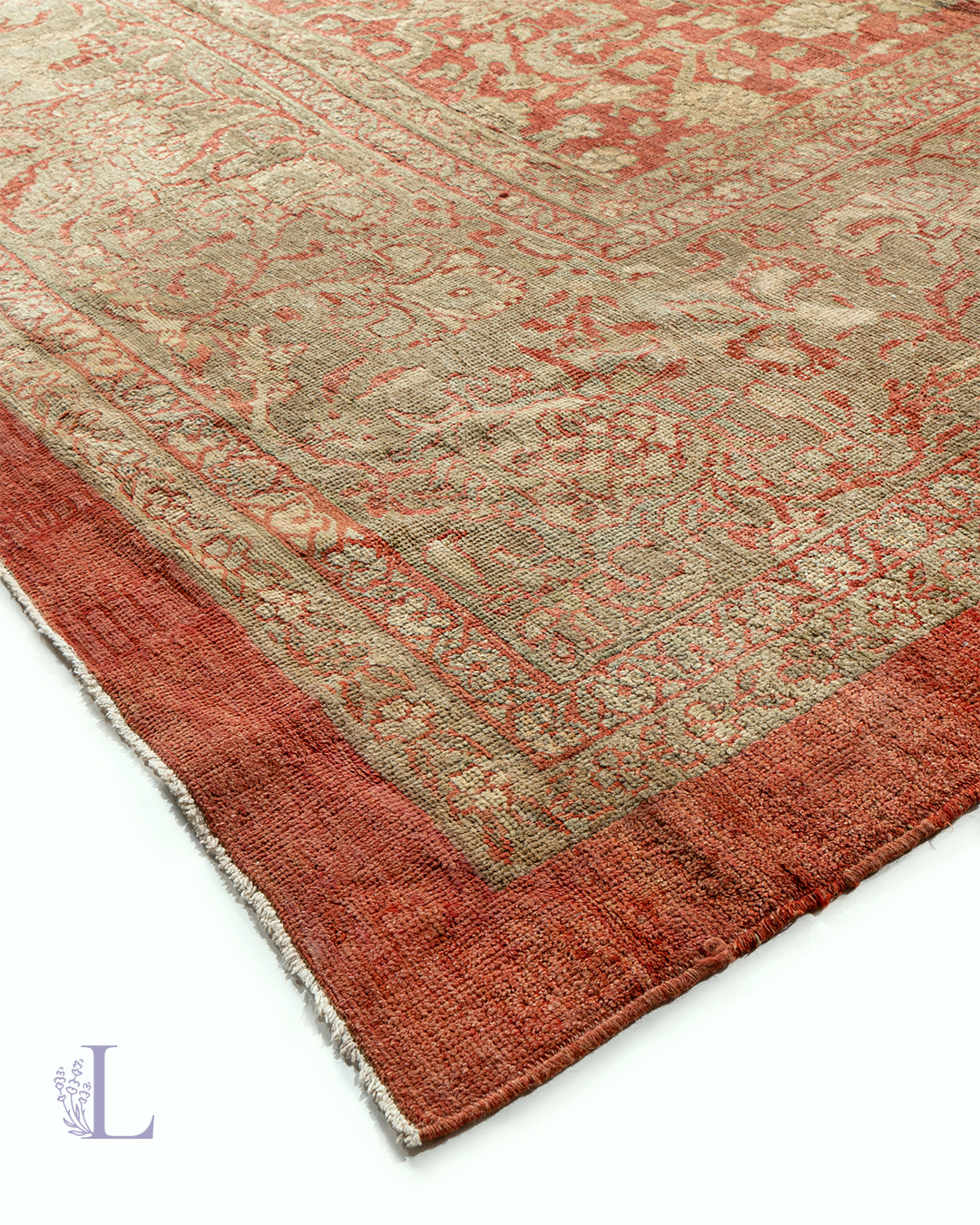 This is a village carpet? Well, a rather large one, not your usual scatter 4 x 6 or room size 9 x 12. Sultanabad carpets were woven in the Arak/Markazi province, around the town of Sultanabad, from the mid-1880’s until WWI, under the aegis and contracts of Western carpet firms, primarily Ziegler and Hotz. Neither firm marked their carpets, but it has been the modern trade practice to attribute quality Sultanabad's to Ziegler. Ziegler had a centralized dye works, design studio, wool processing operation and washing facility, but no workshops, the actual weaving being farmed out to local household ateliers. The patterns were distributed via sampler mats (wagirehs), the knot density and color palettes were assigned, and sufficient wool and foundational cotton were also given out. This splendid carpet must have been woven from a set of extremely well-drawn samplers.
The desirable rust-red madder field shows a classically derived allover pattern of knotted cloud bands, large and complex ragged palmettes, smaller palmettes, slender vinery, leaves and diminutive florets. The accent tones include cream, pale green, straw, and light brown. The taupe main border shows a repeating pattern of double barbed leaves, octogramme rosettes, trefoil palmettes, tilted petal palmettes and supporting vinery. A rust-red plain border frames the whole. The use of plain, field tone borders on larger Persian carpets including Heriz/Bakshayesh and Bidjar weavings is particularly evident in the later 19th century. The knotting is typically coarser which creates the soft look in the design and is on an all-cotton foundation. The pile is of medium density, not tightly packed. Sultanabad's, with their time-mellowed palettes and allover patterns, have never really gone out of style, and especially large ones, as here, have always commanded a premium from designers and their appreciative clients.