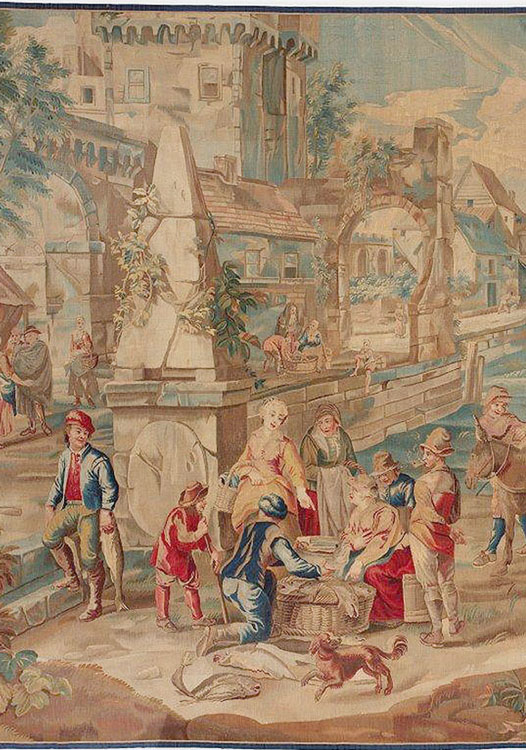 Brussels Circa 1750-Probably woven by Francois Van Der Borcht 1720-1765-Tenier's Style-A placid harbor with a perspectival weighted fortified city scape to left and a stone quay in the foreground with fish mongers and bargaining buyers, along with a tub of fish, a loaded donkey and a running dog. The fishermen's boat lies at anchor to the right. There are a few boats on the water and the clouds are light. There is an obelisk on the left, along with a ruined arch and more figures at a street level open shop. There are vines and other foliage in and around the stone buildings which to be in a slight, picturesque decay. The townscape, rapidly diminishing toward the center, before the horizon is a starburst Tenier's design trope. The composition is an obvious confection of Teniers motives with the addition of the obelisk by an anonymous artist. Another addition is the profusion of vines and small foreground plants. This is not seen in autographed paintings.-The Van Der Borcht's seem to have made a specialty of Teniers inspired tapestries in Brussels in the first half of the 18th century. -David Tenier (1610-1690) painted several versions of the "Return of the Fisherman" Among the best is Klingie, M; David Teniers The Tounger (Antwerp 1991) no 83, vertical format, private collection. Another 'Harbor scene with Fisherman" is at Dyrham Park, England, National Trust. As in the other tapestries, our piece retains its subtle complex color pallet in good condition, with almost no fading. -