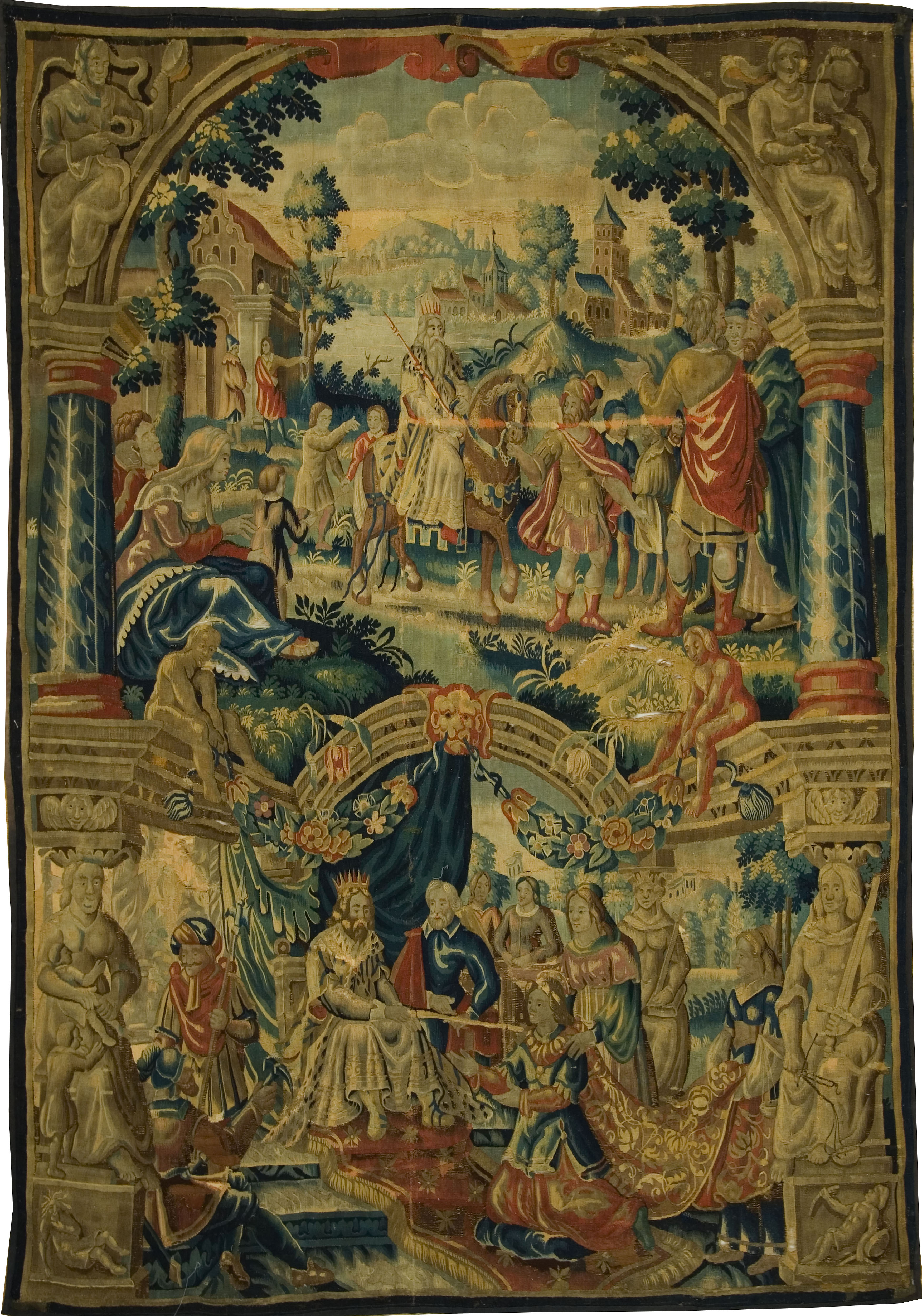 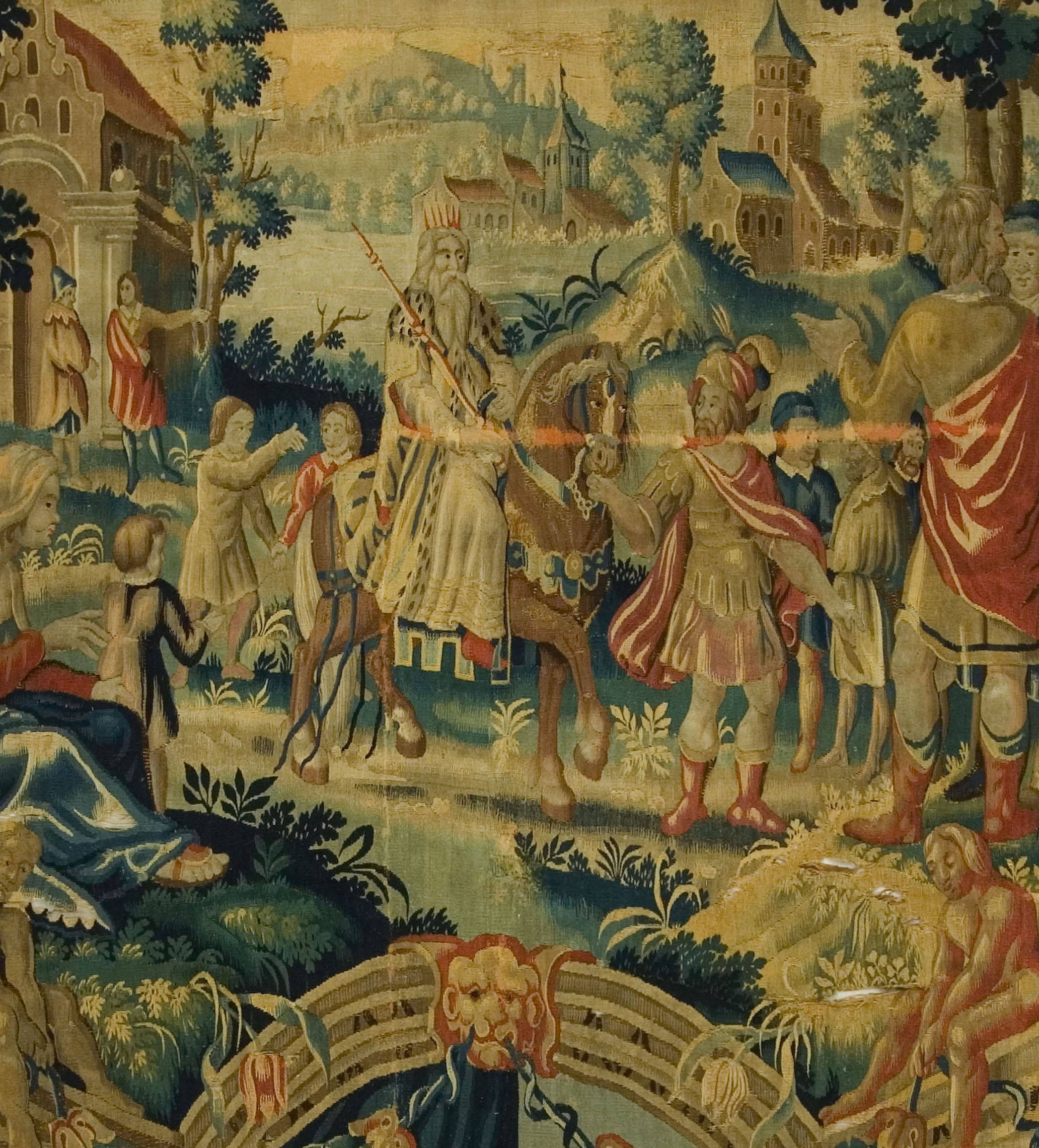 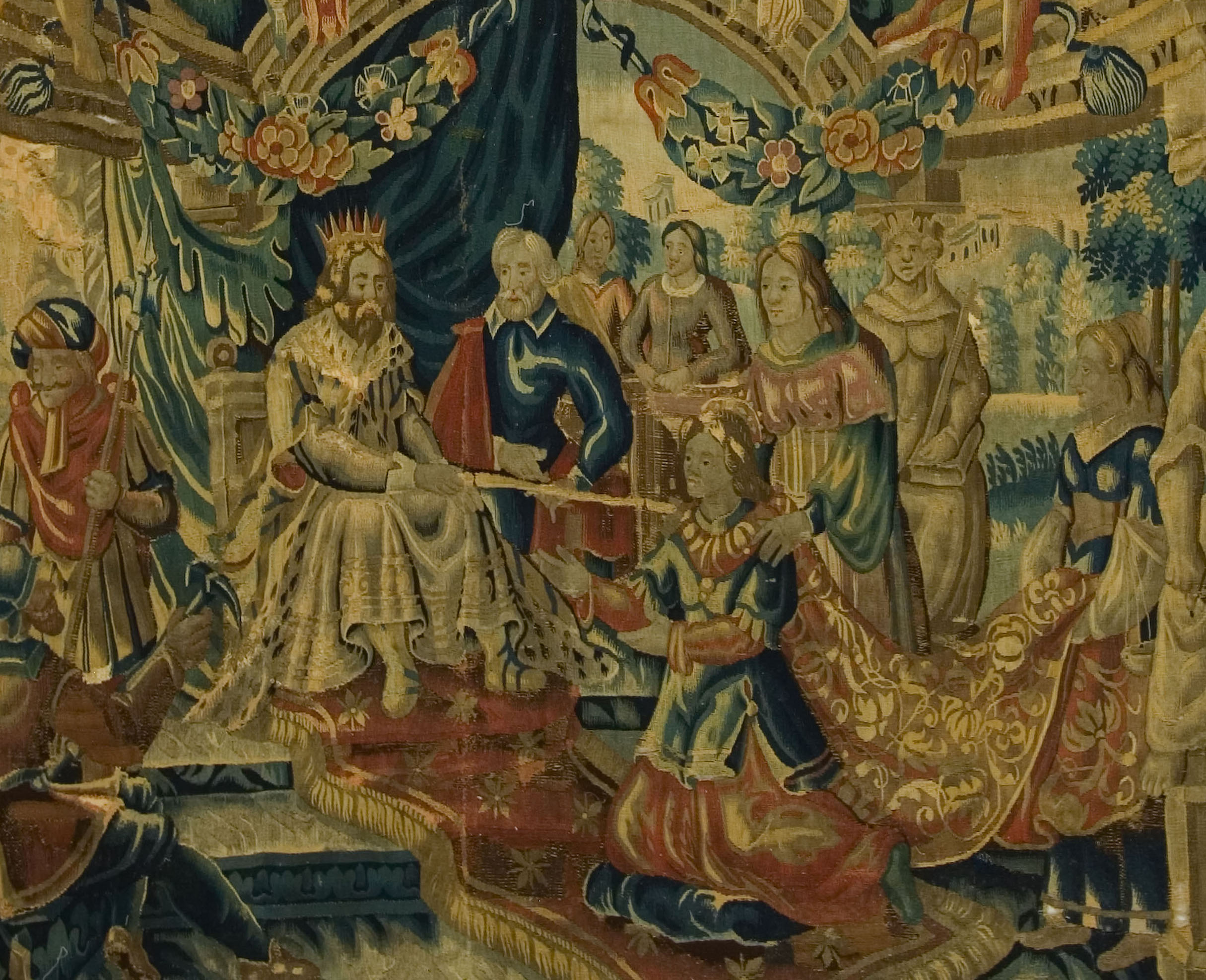 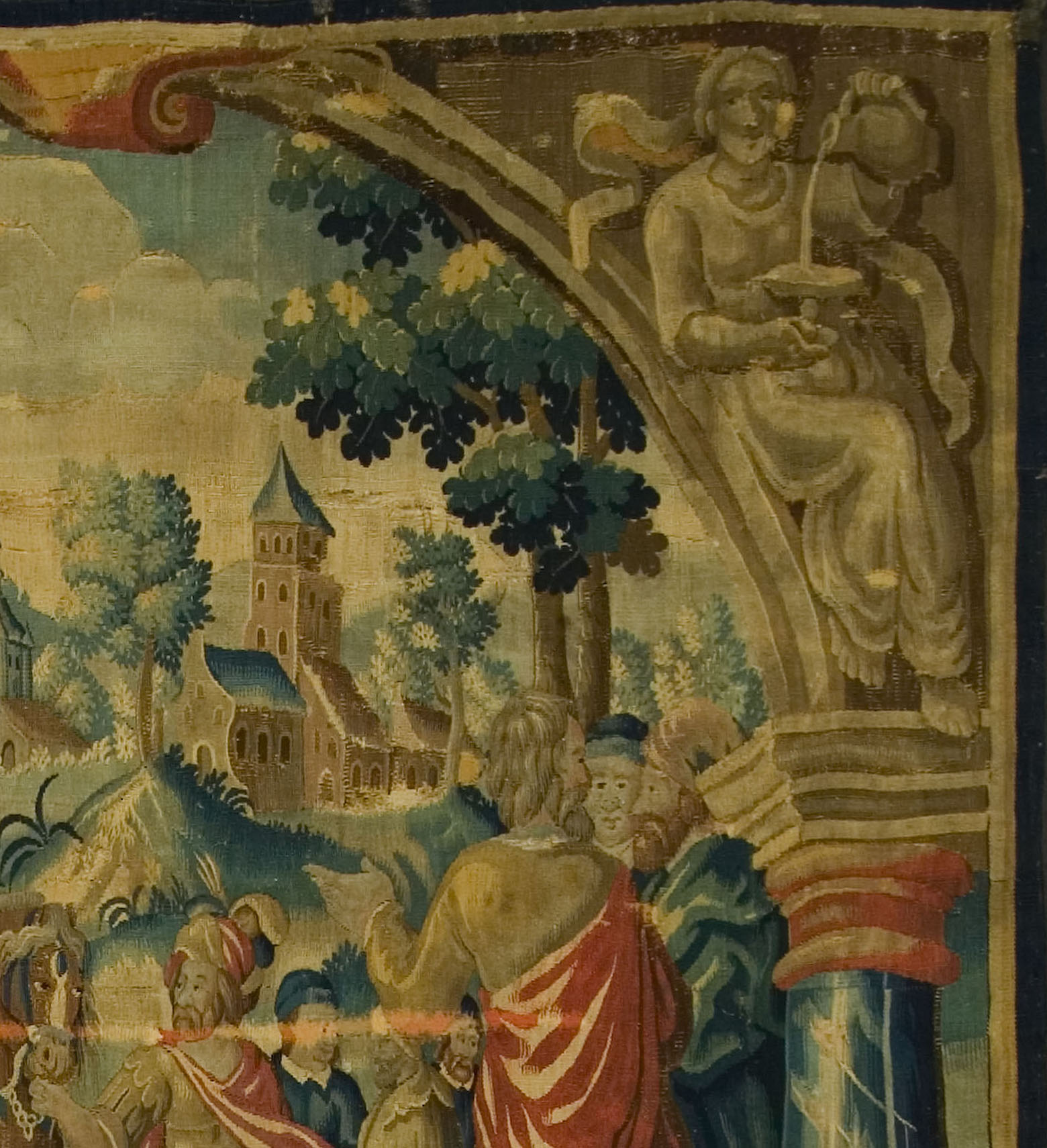 Dutch Biblical Tapestry-Probably Delft-From the Workshop of Francois Spierinc -C. 1620-1640- This extremely rare Dutch Baroque tapestry depicts two scenes from the Old Testament Book of Esther. In the upper section King Ahasuerus (= Xerxes I) of Persia is seen riding horseback with a few retainers and numerous spectators in a summer landscape. The scene is pastoral with a large structure gabled in the Netherlandish style to the left middle ground, and a church and other substantial structures further back on the right. There are trees in full leaf to each side as secondary framing elements, and puffy clouds above. It was a common practice for rulers to tour (invigilate) their domains to see that all was going well: justice was administered, the people were prosperous and generally a peaceful atmosphere prevailed. There is no specific section of the Esther legend detailing the King’s travels.- In the lower second scene, under a schematic arch, the enthroned Ahasuerus is listening to the plea of his Jewish queen Esther to spare the Jews who had been marked for slaughter by the evil Vizir Haman. The arch is centered by a lion mask, possibly an oblique reference to the King: the lion is the king of Beasts and Ahasuerus is the King of Men. Esther is supported by train bearing ladies-in-waiting and many more women behind. The white bearded elderly male figure dressed in blue to the right of the King is Esther’s father Mordechai who will be appointed Vizir upon the execution of Haman.- The artist has employed stock figures in both halves of the composition: The seated woman and back-viewed male in the upper section and the two armed figures, one seated, one standing, on the left of the lower scene. These figures appear in numerous paintings and tapestries of the period, and do not have any bearing on the narrative. At best, they serve to frame, populate and comment on the scene. They have no iconographic value and are not germane to the story.- The execution by hanging of the evil Vizir Haman is not depicted here. It may have appeared in another tapestry of the set if it existed.- The scenes are enclosed by a quasi-architectural “window” frame with polished dark marble columns on the upper sides and female caryatids below. There are figural spandrels above the column capitals and impost blocks. The four women depicted are:Prudencia (top left), Temperancia (top right), Charitas (bottom left) and Justicia (bottom right). There is another female caryatid figure to the right rear of this fantastic structure, but her attributes are partially hidden and definitive identification is not possible. All these figures are in grisaille tromp l’oeil style of faux reliefs or in-the-round statuary. The two foliate swags above the lower scene are held by nude male and female figures. The carpet under Ahasuerus’s throne is in runner format, red with gold stars and all around fringe. Esther’s cape is a silk brocade with a stylized floral design.- The double height, vertical format tapestry is a Delft specialty. Often used above fireplace mantels, the upper echelon may be either pictorial or decorated with grotesques, masks, animals, rinceaux, etc. Another (1620-1640) tapestry, but not from the same set as this one is in the Fitzwilliam Museum, Cambridge University, with Rebecca and Eliezer on top and Isaac and Rebecca in the lower part. Old Testament scenes were popular with the Dutch 17th century mercantile aristocracy. This latter piece is also attributed to Delft. Brussels almost never employs a two level layout. - The scenes in Delft tapestries were usually adapted from Antwerp prints of the late 16th century and it would not be surprising to find the pictorial source for this tapestry scene in one or two of them.- The style is so distinct from those of the Brussels tapestry workshops and fits so neatly into known Delft production that the latter town is almost surely the source. Antwerp or Utrecht are most unlikely. The rather stiff, small; figures with dots for the eyes are a Delft and particularly Francois Spierinc characteristic. His ateliers were responsible for most of the better Delft tapestries of the early Baroque period. The cartouche tapestries, with a figural scene in a cartouche, below a panel with grotesques and floral elements, are generally all attributed to him, and they are in the same style as our Esther hanging. It is most reasonable, barring the appearance of any evidence to the contrary, to ascribe this seemingly unique piece to him. His designers are, at present, not known, however.- The colors are well preserved and the figures lively. The iconography in field and border would appeal to a Dutch client eager to display his knowledge of textual esoterica.-- 6’ wide x 8’8 high- - -